Consumer choice is the most important factor when it comes to cosmetic sales. Today, a growing number of consumers are opting to move away from synthetic preservatives such as parabens, formaldehyde donors and phenoxyethanol. In addition to public pressure, the use of these synthetic materials in cosmetics is also becoming more strictly regulated. For these reasons, formulators have been actively searching for alternatives to synthetic preservatives that can provide broad spectrum antimicrobial activity.

Active Micro Technologies (AMT) has developed a full line of products derived from naturally occurring compounds that provide broad spectrum antimicrobial protection. As a result, these novel natural antimicrobials can be used as consumer-friendly alternatives to synthetic preservatives in a wide range of cosmetic applications.

Leucidal® Liquid PT is a probiotic-based ingredient created by the fermentation of Lactobacillus in a defined growth medium and at specific conditions. Lactobacillus is one of the species of microorganisms used to produce fermented products such as sauerkraut and kimchi, a Korean dietary staple, from cabbage.

Like many members of the lactic acid bacteria family, Lactobacillus is capable of restricting the growth of other microorganisms by acidifying its environment. During the fermentation process, in the presence of both standard growth media components and undecylenic acid derived from castor beans, the pH and oxygen levels for Lactobacillus are pushed to their limits to induce the production of secondary metabolites as a response to stress. These synergistically active compounds are capable of providing conditioning benefits. An additional growth characteristic of the lactic acid bacteria family is the production of novel antimicrobial peptides. In their natural environment, these antimicrobial peptides provide a competitive advantage to the lactic acid bacteria against other potentially competitive organisms.

After fermentation, lysozyme is added to the culture to facilitate a controlled cell lysis. This step helps ensure the release of the antimicrobial peptides for maximized activity.

The ability of Leucidal® Liquid PT to act as a broad-spectrum antimicrobial is enhanced by the presence of water-soluble undecylenates generated by the Lactobacillus during the fermentation process. Undecylenic acid is an oil-soluble, unsaturated fatty acid typically produced by thermal conversion of ricinoleic acid derived from castor oil. Castor oil is a 100% vegetable, biodegradable, natural and renewable resource. In nature, trace quantities of undecylenic acid are also found in human tears and hair.

Biotransformation of undecylenic acid by Lactobacillus allows for the generation of water-soluble undecylenates. This process permits the inclusion of this well known anti-fungal agent without the need for undesirable synthetic solvents. In addition to its antimicrobial properties, this odd-carbon number unsaturated fatty acid is a very effective skin moisturizer.

A Minimum Inhibitory Concentration (MIC) test was conducted to evaluate the ability of Leucidal® Liquid PT to inhibit the growth of a variety of bacteria and fungi. The results show that this material is capable of providing broad spectrum antimicrobial protection.

A challenge test using 2% Leucidal® Liquid PT was also conducted to evaluate the ability of the product to provide antimicrobial protection in cosmetic finished products. An eye shadow formulation was used as the base. The samples were inoculated with E. coli, P. aeruginosa, S. aureus, C. albicans and A. brasiliensis and incubated for 28 days. During this period, samples were periodically collected and tested for the presence of viable microorganisms.

Based on these results, Gram positive and Gram negative bacteria, as well as the yeast and mold were reduced by greater than 99.9% within 7 days of the initial challenge, proving the product’s ability to protect cosmetic formulations against microbial contamination.

We recommend incorporating Leucidal® Liquid PT at temperatures lower than 70 ̊C and a pH between 3 and 8. In addition to this product’s effectiveness for powder applications, this product can also be easily incorporated into emulsion systems and water based applications. For color applications, we recommend spraying the product on the pigments along with other ingredients such as binders. Examples of some additional potential applications for Leucidal® Liquid PT include hair care products, deodorants and beauty creams. 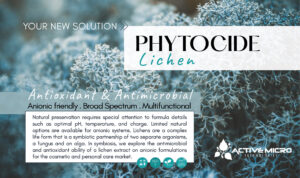